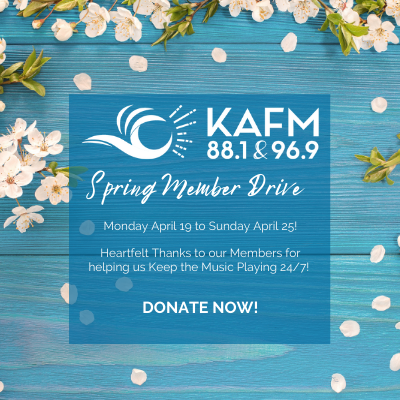 Membership is the most powerful part of KAFM’s future and sustained growth!

If you tuned-in and benefitted from listening to KAFM over the past year, you were able to do so because of our Members. Please join in supporting all our DJ’s who play the largest variety of music on the dial and community outreach shows like; Community Affairs Hour, Children’s Hour and the Colorado Playlist.

Whether you choose to give monthly as a Monument Member, or wish to support the programs you love with a one-time gift, members are a vital part of KAFM! As we look to the future with fresh hope, promise, inspiration and ideas, staying informed and connected to our community will continue to be vitally important as we work together to reconnect after such an unprecedented year.

Already a Monument Member and want to change your monthly gift amount, update your payment information, or put your membership on hold? Please contact us at info@kafmradio.org or 970-241-8801 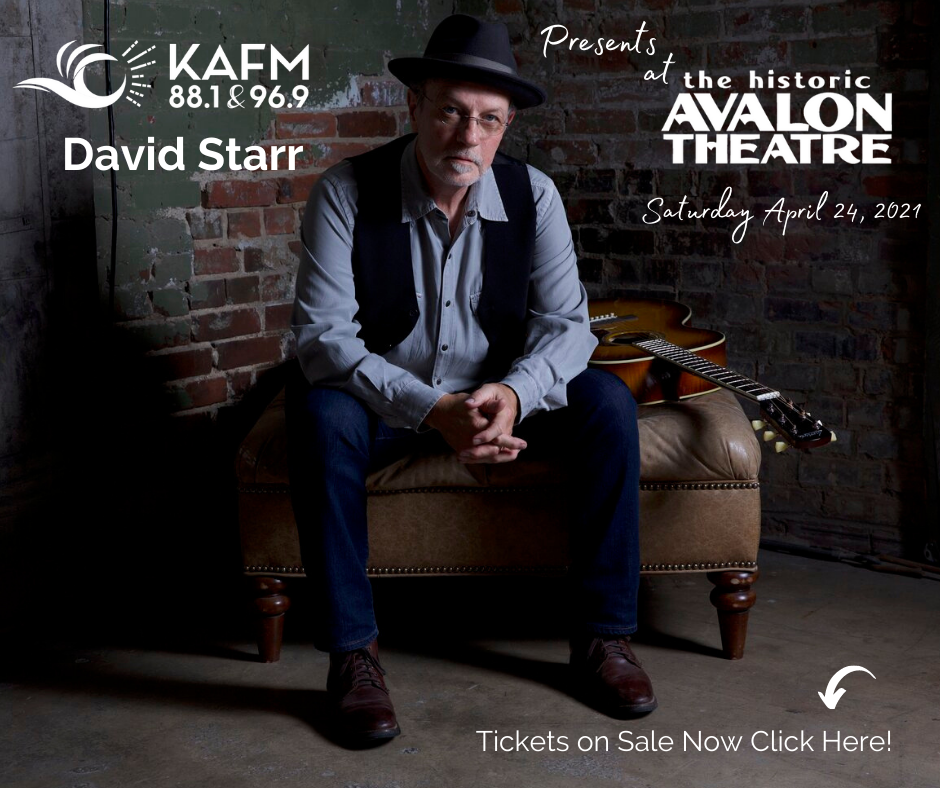 During a year where COVID-19 stopped the world in its tracks, Colorado-based Americana artist David Starr took time to reflect on and experience anew the music that shaped his own. Many of the songs he chose to record he describes as "musical comfort food".

Join KAFM for a special Member Reception prior to the show on Saturday April 24, on the beautiul Rooftop of the Historic Avalon Theatre. Get your tickets NOW!

“Some of the songs I cover were lyrically inspiring,” explains Starr. “Some were songs I’d played in bands over the years. Some just felt good to sing and play. Others brought back fond memories or a kind of familiar melancholy.”

Touchstones was produced by David Starr and Mark Prentice, with co-production by David Kalmusky. All of the songs were recorded, mixed, and mastered at Addiction Sound Studios in Nashville by David Kalmusky along with Ethan Barrette and Alberto Sewald.

"Every Kinda People" features John Oates (Hall & Oates) and Michelle Prentice on background vocals, Mark Prentice on bass and keyboards, Dan Dugmore on acoustic guitar, John Prentice on electric guitar, and Matt Bubel on drums. The accompanying music video was directed by Jason Denton of Solar Cabin Studios. “We gotta heal and work together right now,” says Starr on the message behind the song. “This year has brought out the best and worst in us. Time to look hard in the mirror. It takes us all to make it work.”

Touchstones follows Starr’s acclaimed February 2020 record, Beauty and Ruin. Produced and arranged by John Oates, the collection of songs was inspired by Of What Was, Nothing Is Left, a novel written by Starr’s grandfather in 1972. “It is like watching a movie,” says Oates. "The cinematic aural landscape visually evokes a classic tale of tragedy, love gone wrong, and an exploration of human nature and all its flaws." Beauty and Ruin and an updated edition of Of What Was, Nothing Is Left are available now at davidstarrmusic.com and across digital platforms. 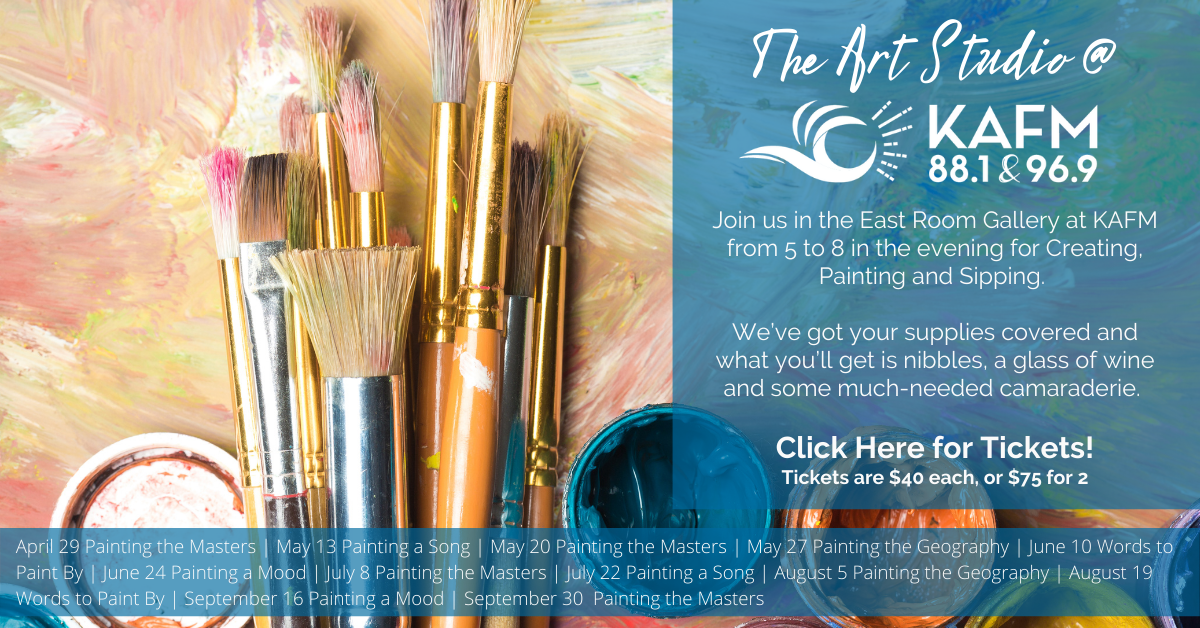 As the finale to KAFM Community Radio's Spring 2021 drive, we are proud to welcome live music back to the Avalon Theatre. Join…

THE BENEFITS OF SUPPORTING KAFM... THE VOICE OF OUR COMMUNITY!

The Largest Variety of Music on the Air Waves   KAFM plays an incredibly diverse variety of music including independent artists and new music you won’t hear on anywhere else. There is almost a limitless amount of music that’s been recorded in the world, yet most of it doesn’t get heard.  KAFM is here to change that by keeping musical diversity at the top of our list when is comes to programming.

Inclusivity   KAFM volunteer programmers are the heart of the station.   They are all members of our community and everyone is invited to participate!

Automatically Entered to Win  When KAFM conducts Contests and Raffles your Monument Membership automatically gets you an entry ticket to each and every contest we run.

Community Affairs Hour   KAFM provides a voice for local businesses, non-profits and community leaders to talk about issues that affect the Grand Valley without bringing politics to the discussion.

Our Neighbors   City governance and civic life get a spotlight from KAFM community radio in a manner that gives residents a chance to understand their neighborhoods in richer and more informed ways.

Our Announcers   KAFM gives the Grand Valley something to be proud of and excited by, because it’s a unique attraction for the area: local volunteers bringing their love of the region to life with fun programming, thoughtful discussions and a glimpse at the diversity of the beautiful area we live in. Our Announcers are your friends and neighbors!

Live & Local   In the increasingly corporate world of radio, low-power FM isn't about how far your signal reaches but how near.  KAFM provides a uniquely local view for the Grand Valley community.

Our Volunteers   KAFM provides community space for people to meet and collaborate. Volunteering at KAFM is a fun and often life-changing experience that encourages creativity and self-empowerment.   Our programmers and staff find it extraordinarily satisfying, not just to make radio in this unique fashion, but to also help transform community life.

KAFM is here for the community, working together with local non-profits to fulfill their missions to educate and improve the quality of life for everyone in the Grand Valley. If your non-profit organization has a message to share with our audience, please submit a PSA Request using our contact form, via fax at (970) 241-0995, or stop by our offices during business hours (Monday - Friday, 9am - 4pm).
© Grand Valley Public Radio Co., Inc. | All Rights Reserved
On Air: On the Freeway Suzi Creme Cheeze 1:00-4:00
Up Next: Bluegrass and Beyond Veta 4:00-6:30