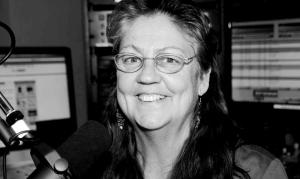 Can’t be described!  That’s all folks!

Really though, I have never wanted to have a regular show.  That’s a huge commitment for programmers and involves a lot of time and passion.

To my liking, as my passion, I sub for a lot of programmers, but the nearest thing I have to a regular show is the OBX show where I occasionally sub and sit in on the 5th Tuesday of the month from 6:30-9 p.m., which works out to be about 4 times a year.  I am proud to be a part of a community radio station that is now 15 years old in 2014.   What a long, strange trip it’s been!  But obviously a lot of fun!

I like to play a variety of music like Blues, Americana, Rock, Country, Folk, Jazz, and have filled in on a few Orbit Lounge shows playing “chill-lounge music”.  I was the Morale Officer on that show and was also the Enforcer in my early days as a programmer.  I chose my current radio name Jazzy Jill because I think I have a “jazzy” personality.  I like all kinds of music except rap, hip hop, and heavy metal.  I’ll leave that music to be played by other programmers.

Look out though!  You will usually find me at live music venues and I will probably come over and say hi to you if you don’t run away from me.  But in the meantime, keep listening to KAFM and catch me on the radio now and then.  I welcome your phone calls.