“Goat” was born in 2000; Chris “K” was born in 1978; Chris Kresge was born in 1955, and I was born with music flowing through my DNA. My father was a professional musician when I was born, as well as an aspiring actor, restaurateur and engineer. He was also a photographer, which led him to my maternal grandfather and, through that connection, to my mother.

My maternal grandfather was a multi-instrumentalist who went by the name “Bunny” during the tin pan alley and swing eras of the 1920s to the 1940s in the Trenton / Philly / NYC region.  He was also a professional photographer.  I never knew him.  I recently came across some old family photos though … and it blew me away.  He and my father had much in common.

I originally came to Denver in 1973.  I was stationed at Lowry AFB for eight weeks of tech school before being permanently assigned to Minot AFB, N. Dakota.  I knew then I’d be back.

I began acting when I was 6 years old, in Anchorage, Alaska. We moved there in 1958. My first acting role was as one of the Stockman boys in Henrik Ibsen‘s “An Enemy of the People.”

In high school (1969-1973) I was a critically praised young stage director, with scholarship offers and acceptance to theater arts programs at schools like Syracuse University and Carnegie Mellon. My senior year was consumed with an independent study project on Stanislavski Method Acting that earned me those opportunities.

I studied voice and acting under Arden Broecking, at the Darien Consortium.  I wasn’t cut out to sing opera, or musicals, and I was only adequate as an actor (according to my dad and the local critics) …so despite the accolades for my research project, I never took any of the offers to get a degree in theater arts.

My father owned the first jazz club in Anchorage circa 1961. He started me on my lifelong journey in entertainment.  He taught me enough drums that I could “sit in” (not really) with his quartet when there was no one at the club. From 1st grade through high school I studied acting and music (trombone, trumpet).  I got my first guitar in 1969.  My favorite guitarist was Eric Clapton (Cream era).

I started deejaying in Bridgeport, Connecticut in 1969 – at basement parties – junior high and high school kids french kissing in the corners, or grinding on the “dance floor” to sexually laden pop. I guess not much has changed in that regard.  I had the best record collection of all my friends – all the hits.

WNEW-FM in NYC was my go-to station in high school – especially my senior year from 72-73.  I had a teenage crush on Alison Steele, the Nightbird.

I joined the Air Force in 1973 to earn college money via the GI Bill.  I wound up taking my basement deejay skills to Airmen and NCO clubs and bases across North Dakota when I was stationed at Minot AFB (1974-1975). My time in the USAF gave me a passion for what I hoped would be my life’s work.  My time in Denver gave me my passion for my future home.

Labor Day weekend in 1976, I got in a car with some goodies and drove to Denver with my best friend at the time (and, boy, did he hate the corn in Kansas).

I went to the Ron Baile School of Broadcast in Denver in 1977 – and got my first job in broadcast radio in April 1978, at KBIM AM/FM/TV in Roswell, New Mexico. The heat, scorpions, and rattlesnakes pushed me out after not quite five months.

From 1978-1981 I was also the house jock at a dance club called Theo’s in Greeley, and I worked at the original Finest Records and Tapes, and at Budget Tapes and Records.

I moved to Los Angeles to be in a band in January 1981, and wound up back in New England until the fall of ’83. 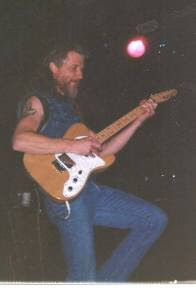 The first NoCo band I was in (1987-1992) was the popular classic rock band JAB (Just Another Band). I was the “third” guitarist – called on when needed to fill in. The lead guitarist and I spun out of that band and created the southern rock jam band called Alien Cowboy, with a heavy accent on bands like the Allman Brothers and Little Feat. It was a great time.  We played in support of Dave Mason, Edgar Winter, Black Oak Arkansas and others. Our one major accomplishment was touring England and Scotland in 2000.

After coming back from England, I gave up the band, went solo, and got into venue work – taking over booking, promoting and doing sound at the 250-seat Archer’s in Fort Collins. That year, my then-girlfriend, Miss Pattie invented “the picky grumpy old goat” moniker. She also created my logo.

We did well enough musically over the years to open for Guy Clark, Cross Canadian Ragweed, Reckless Kelly and the Railbenders – and to play places like the Aggie Theater, the Rialto Theater, the Soiled Dove…

In 2004 Bohemian Nights and the CHUN People’s Fair came calling, and I joined those programs as talent advisor and mainstage emcee.  The Colorado Sound got its start at KRFC (Fort Collins) in 2006.  Today the show is on the air statewide.  I also produced the Dacono Centennial Celebration that year.  The event turned into the annual Carbon Valley Music & Spirits Festival, held on the first weekend in August every year.

LIFE UPDATE: September 2019 – The Colorado Playlist is now on over 52 hours a week statewide, spread across 25FM frequencies.  I released my debut record this year.  Check it out at http://www.goatzmusic.com/music.   I’m still on the air at 105.5 FM The Colorado Sound KJAC Greeley.